Roadbuilders reached Loveland’s U.S. Highway 34 doorstep in 1963 as they pushed two parallel ribbons of concrete northward from Denver toward Wyoming. At that time, a motel and gas station were the only businesses at the junction of U.S. 34 – then a two-lane country blacktop – with the new, four-lane Interstate 25.

In the 55 years since, I-25 hasn’t changed much. While enhanced safety features and larger, more efficient interchanges have been added, I-25 remains a four-lane highway – now clogged with traffic during most daylight hours, and sometimes at a near standstill during peak morning and evening rush periods. Traffic counts have been driven upward toward the point of paralysis by the emergence of I-25 corridor commercial centers from Johnstown to Fort Collins and residential developments that stretch out east and west of the highway.

The Colorado Transportation Department (CDOT), in financial partnership with local governments including Loveland’s, has acted to forestall that tipping point with the North I-25 Express Lanes Project that officially launched in August 2018. Loveland has three big reasons to pay attention. Three I-25 interchanges – at Crossroads Boulevard, U.S. 34 and Colorado Highway 402 – lie within the City’s jurisdiction. Each of them is due for changes during the Express Lanes project that will raise I-25’s fourlane capacity to six by late 2021. Rounding out the $300 million plus project are bridge, bus and trail improvements – including many in Loveland – that will improve mobility both on and off I-25.

During the next four years, Loveland users of I-25 will see: 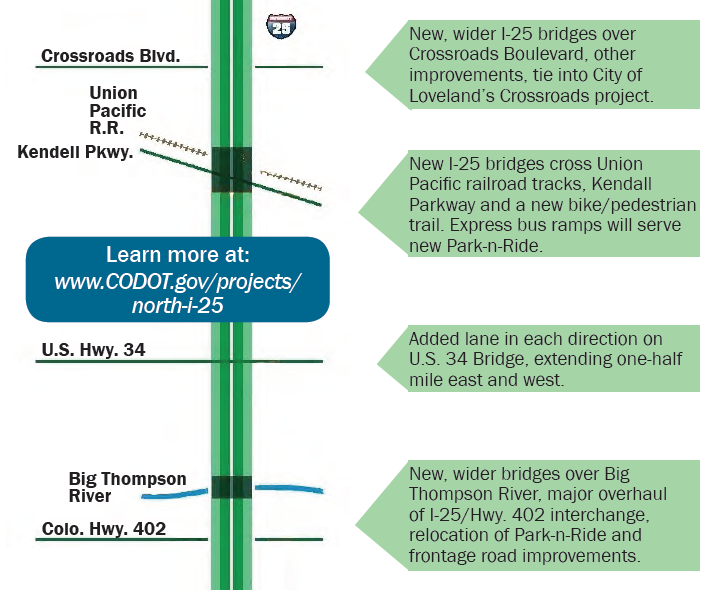 Motorists will not be the sole beneficiaries of the Johnstown to Fort Collins Express Lanes Project. Transit and trail users are also accommodated, with features that add efficiency to express bus service connecting Northern Colorado and metro-Denver. Cyclists and pedestrians will have access to 100-plus miles of trails with an I-25 underpass for the popular and heavily used Poudre River Trail. Loveland pedestrians and cyclists will also enjoy a new trail parallel to the new Kendall Parkway under I-25 between Crossroads Boulevard and U.S. 34.

Former Loveland Mayor Kathy Gilliland, now District 5 Colorado Transportation Commissioner, said the project culminates more than two decades of planning. “It goes back to when I was on City Council in the 1990s,” said Gilliland, who represents four counties including Larimer and Weld on the state commission. “We saw then what the demand would be, and that we really needed to widen I-25.” Nearly 30 years later, following an exhaustive, $11 million environmental study that took the better part of a decade, a federal grant and contributions from I-25 corridor communities make the Express Lanes project possible.

Loveland’s stake so far is $2 million, appropriated by City Council earlier this year, with two more $2 million installments scheduled over the next two years. McWhinney, the developer of the Centerra commercial and residential properties that straddle I-25, is in for $6 million. “Loveland has worked with me very closely from the beginning on this plan,” said Johnny Olson, CDOT’s regional director in charge of the Express Lanes project. “This is a city that is very forward-thinking. Loveland comes to the table with the question, ‘What do we need to do to make our community better?’”