In the core of downtown Loveland, The Foundry sets the foundation for the revitalization of Loveland’s historic downtown. Project developers, Brinkman Colorado, chose The Foundry as the name for a sweeping redevelopment of nearly three city blocks in southern downtown Loveland. The name reflects how Loveland has risen as a showcase for art, especially sculpture, and celebrates the local bronze foundries who cast the many art pieces here and around the world.

Three underutilized city blocks are transforming into an area with a movie theater, apartments, hotel, retailers and parking. The anchor of the $75 million project is a large public plaza between the buildings with outdoor walkways and seating turning downtown Loveland into a true entertainment destination for visitors and locals, alike.

When all is finished, The Foundry will give Loveland:

Four of the six elements are complete or nearly complete. The parking garage, owned by the city of Loveland, opened at the end of August 2018. One of two apartment buildings also opened at the end of August and the second apartment building opened in November 2018. The public plaza is nearly completed and features bronze sculpture, a splash park, fire feature and a performance stage.  In less than six months, the MetroLux will hold their first screenings and the hotel will be ready for summer visitors. 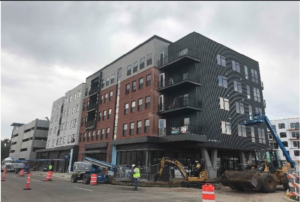 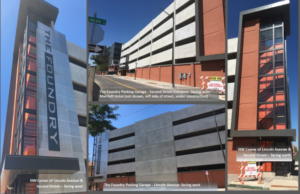 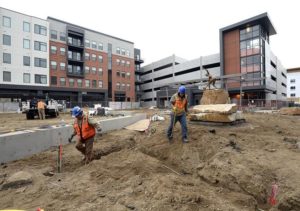